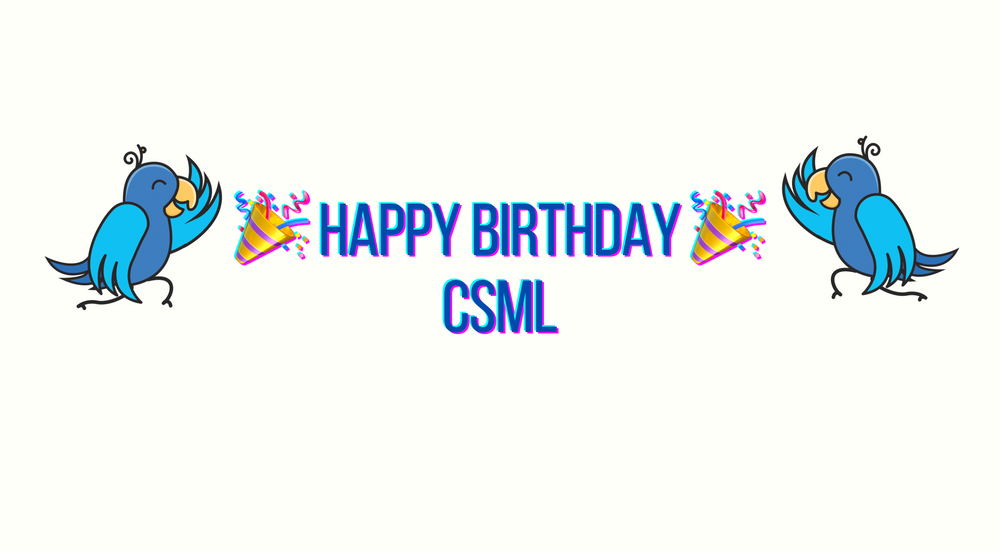 Exactly 1 year ago November 2019 was the official launch of CSML. It was quite a party: 150 people, from students down to investors and corporate partners, came to the event that took place at School 42 in Paris. We had the opportunity to present what CSML was capable of: building chatbots that are context-aware, have short and long-term memory, connect to third-party APIs, are natively multi-channels... All the core features that make CSML *the best* chatbot-oriented programming language.

Last November, we also drafted an ambitious roadmap with CSML Studio, new language features, new CSML Apps, free deployment, free support for the CSML community of developers, new channels, and a lot of open source content on top of that.

Today we're going to look back on the past twelve months and see what CSML and its community of developers achieved in a year.

As you all know, 2020 has been a tough year, while Covid-19 spreading around the world has gotten us to change the way we live.

As soon as Covid hit Europe, the CSML team started working on an open source Covid Chatbot that we named Covidbot. We established strong partnerships with organizations such as the Institut Pasteur and APHP, and dedicated a great amount of our time to building a chatbot that would inform citizens and eventually slow down the spread.

The least that we can say is that Covidbot was a huge success:

Below is the usage across all Covidbots from all countries.

Our vision of CSML is to be the go-to programming language for anybody who wants to build any chatbot. In order to achieve this goal, we believe that CSML must be an open-source project.

We opened the source code of the language and its interpreter in early 2020. It has been a lot of work to bundle not only the language itself but also the whole conversational engine, managing the incoming and outgoing messages, but we've done it!

You can now use CSML as part of a Rust project (CSML is entirely written in Rust), with Docker, as a standalone binary for macOS or Linux, and even as an AWS Lambda package! It is compatible with two popular database engines, AWS DynamoDB for its speed and infinite scalability or MongoDB for its convenience and ease of use even in non-AWS environments.

Have a look at the Github repository and the latest binary release.

One of the great strengths of CSML is that it enables developers to connect their chatbots to any program, software, or API. Many companies saw this pretty clearly and built strong partnerships with CSML to make it easier for CSML developers to connect to their tools with a minimal amount of code. Today, there are dozens of available CSML integrations and the list is growing! It includes universal connectors such as Zapier or IFTTT, business apps like Zendesk, ServiceNow, or ClickUp, all major cloud providers, calendar services like Google Calendar, translation APIS...

Our latest official partner to date is Amazon Web Services, which joined us for the release of Amazon Lex, the NLP service behind Amazon Alexa, in French. We developed a CSML App and wrote an article for the occasion.

CSML is a very high-level programming language, complete with variables, functions, conditions, and loops. It is designed to help the user as much as possible when developing a chatbot with many built-in constructs and concepts to help design rich chatbots in a very expressive, simple syntax.

Because it is so easy to learn, it has been used broadly to teach many people how to code. Schools and boot camps such as ADA Tech School or Le Wagon have been partners of CSML: we helped them bring high-quality workshops to new developers looking to learn the basis of coding. Even corporations such as Danone are regularly using CSML as a learning tool for executive training sessions.

As of today, hundreds of people have attended these free "Initiation to coding" workshops and almost as many CSML certificates have been awarded to attendees who programmed their first chatbot.

We couldn't be prouder of the quality of our community. Thousands of developers from all over the world are using CSML either from the Open Source repository or with CSML Studio. We have seen great success stories with useful, fun, and quirky chatbots developed by developers in Russia, Senegal, Indonesia, Japan, Ireland, Pakistan, Ivory Coast, USA, Philippines, France, Argentina, India, Portugal, Germany...

Don't forget to join our community on Slack, that's where the party is at!

Bring Your Own NLP

One of the key challenges for many chatbots developers is to be able to leverage powerful Natural Language Processing libraries or services such as Amazon Lex, Dialogflow, Rasa, or Watson while building rich conversations with their users. This is also the main challenge that CSML is revolutionizing: you do not have to choose between a powerful NLP and building a rich conversation easily. CSML has built-in tools to help you do just that, while being able to keep using your favorite NLP service or enhance a previously trained chatbot with all the goodness that comes from CSML chatbot development.

CSML Studio comes with a bundle of ready-to-use integrations available to install in just one click. Not only can you add your own integrations in any language (Javascript, Ruby, Python...), you can also benefit from managed integrations with the most popular products and services that you already use! This helps you build more powerful chatbots, even faster.

Sometimes, just a bot is not enough and you need extra help from a human. This is why we added integrations to powerful LiveChat services: Gorgias, specialized in e-commerce, and Chatwoot, our open-source counterpart for an all-purpose, self-hosted experience. We are going to add more LiveChat providers in 2021 as this is one of our most requested features!

From Chatbots to Voicebots to Callbots

A chatbot does not live all by itself. It requires a user interface, which can be any existing popular chat interface, a website, a smart speaker, a phone... anything that accepts user input and is capable of reacting to that input could work. Some interfaces are obvious: Messenger and Whatsapp have billions of users, and if you are using CSML to support your team, perhaps you are using Slack, Microsoft Teams, or Workplace by Facebook. Chances are that many of you have an Alexa or Google Assistant device at home. What about a simple phone?

CSML can not only get you to chat with your favorite services on text-based applications, it can now also handle voice and phone calls, and is well on its path to revolutionize the Contact Center Automation experience.

The least we can say is that 2020 has been a year during which CSML became a great, complete, stable, and scalable programming language.

We're so excited to deliver all this and we're looking forward to working alongside our awesome community.

See you next year!